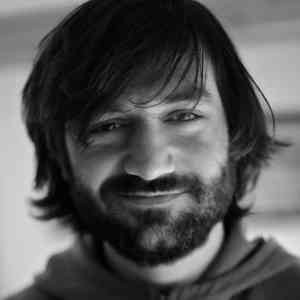 Filipe Vilas-Boas was born in Portugal in 1981. He is a self-taught media artist currently living and working in Paris. Without being a naive tech utopist or a reluctant technophobe, he explores our use of technology and its political, social and environmental implications. His installations, performances and conceptual artworks question the global digitalization of our societies, mostly by merging our physical (IRL) and digital (URL) worlds. His robotic installation “The Punishment” was highlighted in the Portuguese Emerging Art 2018 book and recently his works have been shown at Nuit Blanche Paris, the UNESCO, Biennale Siana, Le Cube, French Ministry of Culture, Athens Digital Art Festival, Monitor - Heraklion Contemporary Arts Festival (GR), MAAT Museum and at the Tate Exchange - Tate Modern (UK).

"The Punishment“ is an installation in which a robot executes a preventive punishment for its possible future disobedience. A reference to Isaac Asimov’s laws of robotics.

Technologies are now merging at high speed, notably robotics and artificial intelligence. It raises a lot of questions about the man-machine relation. Tainted with dark humor, this dystopian anthropomorphization also underlines the fears that robotics engenders. How automated do we want our world, our body to be? What physical, moral and legal framework should we use? What consequences for human life? Isn't it time to reinvent the school? At the turn of the century, questions related to automation are popping up in everyone’s mind. We will have to answers them collectively, if possible.

“Carrying The Cross“ is a durational performance by artist Filipe Vilas-Boas that has been derived from an ongoing body of work investigating global interconnection utopia, spiritual magic and contemporary algorithmic slavery dystopia.

Constructed from timber and nails and measuring 340 x 200 x 50 cm, a giant sculptural “f“ conceived as a commentary on social media, was carried by the artist around Tate Modern ready for crucifixion, marking the pinnacle moment of the performance.

The performative precession was originally conceived as part of “EDEN“, Vilas-Boas’ solo show at Zaratan Arte Contemporânea in Lisbon during July 2019.

The piece aims to stimulate discussion on issues surrounding digital platforms such as privacy, data, surveillance and algorithm biases. “Carrying The Cross“ draws on the emotiveness of hope and oppression within the parameters of digitalisation where technology meets religion.

During the generate! Festival of Electronic Arts, the video documentaries of the performance in Lisbon and London are shown, transported back into public space.